Outlaw Love was written by Eddy Lee and Mentor Williams and the song's theme was probably influenced by Red River’s Memorial Weekend Biker Run, which been going on for many years now.  Outlaw Love is on Eddy Lee's first solo CD - "Horses on the Moon", which was released in May 1996. 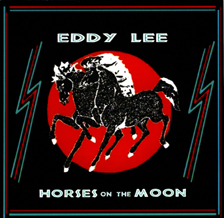 She’s a loaded gun; she’ll pull the trigger just for fun.
She was captured by a desperado’s touch
When she‘s satisfied she just can’t get enough Outlaw Love.
The bars are the biker’s hang out during the time of Red River’s Memorial Weekend Biker Run. Mentor was heard describing it very enthusiastically one time and said it had to do with biker’s and wild living.

When Lynn Anderson went to the Sagebrush in Taos to listen to Eddy Lee she could not sit still when he sang this song and the next thing you know she was up on stage performing with him.

When the Bullington family lived in Houston and they took their young sons to the Astro-dome to see both Jerry Reed and Lynn Anderson. They were able to meet her and she gave Eddy Lee her autograph at that time. Later he was to meet her once again as a musician. Singing with her on stage and she sang "Amazing Grace" with a group of musicians at his funeral.
Posted by Eddy Lee Country at 2:05 PM No comments: Click here for more information on the Rio Grande Band. 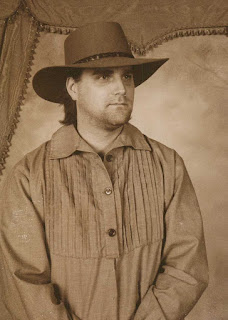 Gary sketched this portrait of Eddy Lee and gifted it to him. Believed sketched from the old time photo made at Red Garter Old Time Photos in the Red River Inn.  Lucky Shot Photo Parlor of Red River, New Mexico acquired the inventory from Red Garter and continues with imaginative photographs beyond the characteristic of old time photos.


Posted by Eddy Lee Country at 1:08 PM No comments:

“Bridge Across Forever” song was written by Eddy Lee and Mentor Williams, who were friends.  The link below is Eddy Lee’s singing this song from the “Luck of Angel” album.  Lynn Anderson, who was known for the song "Never Promised Me a Rose Garden", was ’s partner for years. ‪#‎eddyleecountry‬


Many of the song writers never are really known, but the performers of their music are.   wrote the classic Rock 'n' Roll song "Drift Away".  Mentor wrote this probably in his 20's and what Eddy Lee understood in an apartment behind what is known today as Bull O' the Woods Saloon in Red River across from their fierce competitor the "Mother-lode" where most of the known musicians played and Eddy Lee as well. 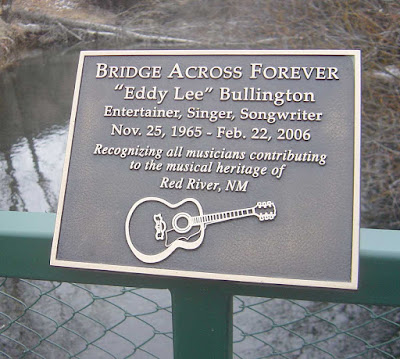 This bridge and plaque were dedicated to the memory of "Eddy Lee" with the name of a song he wrote "Bridge Across Forever" during a ceremony on October 1, 2006.  The cast bronze plaque was created by Artistic Bronze Plaques Inc., which is owned by Mark Troisi of .

The bridge is intended to include musicians in the future that made a music mecca.  It has been a place many have come to listen to the music and dance

Both are located on a Nature hiking trail out side of , which runs along the river at the base of the mountain and is a great hike for kids.  There are signs posted along the trail explaining history, animals, plants and geology of the area.

The hiking trail is located South side of across from the Red River Public Library just before the Y leaving . There are many other hiking trails in the area.